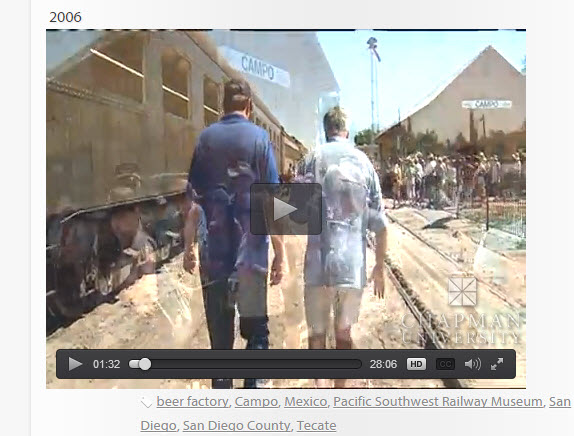 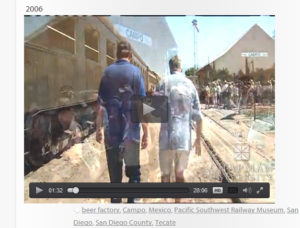 Join Huell Howser for Historic ‘Miracle’ Train (Museum) Ride Between Two Countries, U.S. and Mexico
Click on picture above which will take you to next page where you  will, again, click on the video picture near bottom of page for actual video ride

Been quite a while since we last visited with Huell Howser, late of the great California’s Gold
travel series out of KCET, Los Angeles and broadcast to affiliate PBS stations throughout California.
Once again we’ll venture somewhat  beyond the Bay Area for this short train trip, well worth the view.

Dog Pepe and his master highlight of trip, during stop at beautiful Tecate village, where Pepe greets us standing on hind legs with appropriate cowboy hat. But there’s much more.

Only railroad museum trip in the worldl  that takes you through two countries, US and Mexico. The railway was built in 1916 during World War  1 and is known as the ‘miracle railway’ for all the difficult tunnels and twists and turns that had to be taken in its building.  The trip, open to to the public with the museum, is a mere  12 miles, which takes about an hour, but then guests get off and  tour the Tecate beer plant and have lunch in the square after their free beer, before returning home on the train.

From San Diego to Tecate, home of the well known Mexican beer and brewery,
which cranks out 1600 cans of beer per minute

Beautiful town center that mimicks the great town centers of big cities deep into
Mexico such as Guadlahara, though Tecate is a mere stones throw from the United States. 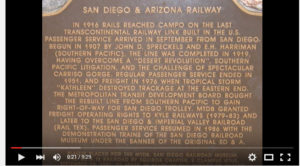